What’s been happening at Svenskhomes

Planning for the future, the energy-efficient farmhouse built to enjoy retirement 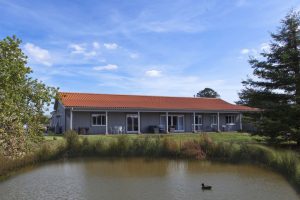 How long-term Fram Farmers member and former director, Harry Standley and his wife Alison, built their new, energy-efficient Suffolk home from scratch, planning ahead for retirement in comfort, with help from the Fram Farmers’ Building Materials Team …

When the time came to start planning for a more relaxed lifestyle after more than 50 years of farming together, the comfort of retirement didn’t sit well with the challenges of maintaining a 16th Century Grade II listed farmhouse, for Suffolk farming couple Harry and Alison Standley. Initially farming at Benningham Hall Farm in the mid-Suffolk village of Occold, slaughtering 500 pigs a week for some 30 years, before a move to Aldeburgh preceded the purchase of Yew Tree Farm in Laxfield in 2004, the time was right for the Standley’s to start planning for a more relaxed future.

Yew Tree Farm is an arable-only operation, growing winter wheat over half of the 270 acres of Suffolk farmland, with the rest allocated equally for OSR and sugar beet.

“It is big enough to make sense, but not too big that it’s unmanageable,” says Harry, adding that neighbouring farmer Stuart Baker undertakes the bulk of the work on a contract basis, as he has done for the past 16 years, while Harry maintains the books.

Having taken the decision to step-back from day-to-day farming, Mr & Mrs Standley decided they wanted to look at alternatives to the farmhouse, single-storey accommodation a prerequisite.

“The whole process started three years before we moved, when we looked at the option of replacing an old grain store on site in 2017 with a new build property. Once the decision was made, we put the farmhouse on the market in 2018,” says Mr Standley.
But this was only the start of the story, and it was the Standley’s other great passion, boating, that was the almost accidental inspiration behind the build design.

“We spend a lot of time in Sweden, where we have a boat, and, over time, have grown to admire a lot of the Swedish architecture,” explains Harry. “I happened to mention this in passing to my bank manager, at Swedish-owned bank Handelsbanken, and he in turn referred me to Ipswich firm Svenskhomes, introducing me to Trevor Walshe.

That set the wheels in motion, and plans were soon underway. Svenskhomes supplies pre-manufactured kit homes, manufactured in Sweden, for builders and self-builders across the UK. Harry was soon looking at designs that would fit alongside the other older barns and properties on site, several of which are also listed. Local architect Peter Wells worked with the Standleys, advising on planning requirements. “Peter was positive about the concept from the start,” explains Harry, “He knew that an energy-efficient timber-frame home, like the one we had in mind, would be accepted by Mid-Suffolk council.” Once planning consent was approved, Harry and Peter worked together on the designs, with Harry even converting some of the old buildings on site into car garages.

Harry has always made good use of his Fram Farmers membership, sourcing everything from fertilisers and agrochemicals, to utilities, fuel and tyres, also marketing grain through the cooperative. Now it was time for Nick Millar, Fram Farmers’ building materials buyer to take centre-stage. Work started on 23rd October 2019, after the farmhouse was sold, with an insulated floating foundation system from Advanced Foundation Technology in Derbyshire, similar to that used in Sweden, put down for the base.

Harry then turned to Nick and Fram Farmers to source materials including all of the concrete for the base and part of the yard, all the underground drainage pipes, sewage pipes, plaster and plasterboard, as well as some of the timber and paint. “These types of houses go up very quickly,” explains Harry. “Once the kit arrived in the UK, the Svensk team were on-site for just over three-weeks from the beginning of March, luckily just before lockdown. “They got the shell of the house up and the room divisions in place in that time. The crane was only on-site for three days, and the roof was also on within three days,” he adds.
Once the kit was up, the rest of the materials came through Nick and the Fram Farmers building materials team, including the aggregates and everything required to finish the outside of the property, with labour provided by a local builder. “Nick was brilliant, I must have rung him up a hundred times and he delivered every time,” admits Harry. “I asked the most obscure things and he never minded, I think he has the patience of a saint. Fram Farmers do far more than source materials from suppliers, the service goes a lot further than that.” 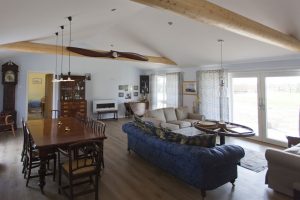 Having moved into a mobile home on-site when the farmhouse was sold, even using a container to run the farm office, Harry and Alison were finally ready to move into their new home on the 3rd July 2020. For Harry and Alison, the combination of independent supplier Svenskhomes and Fram Farmers’ building materials department has resulted in a modern, energy efficient open-plan retirement home, with minimal stress. Harry says, “In theory, it should cost nothing energy-wise to live here. I have two wind turbines on the farm to power the house and it is so heat-efficient that the air source heat pump provides as much heat as is required. It is very well insulated, and the windows and doors are triple glazed.”

He adds, “Nick at Fram Farmers has been invaluable in sourcing the materials required and has worked seamlessly alongside other suppliers to deliver what was required, often going the extra mile. “Our trusted relationship with Fram Farmers has really eased the burden, with simple account billing, all in one place, really helping us to manage the project.” Now the Standleys can sit back and enjoy it.

Pride in the Job

Svenskhomes are delighted to receive the NHBC’s recognition for the quality of our offsite construction / sustainable building techniques, where we concentrate on thermal performance and energy efficiency. The Westleton property received an A-Rated 95 EPC which is quickly becoming our standard EPC result.

Svenskhomes are proud winners of NHBC Pride in the job award. Read more about this fantastic achievement. facebook.com/Svenskhomes/

@KinedobySaniflo Typically 10 -14 weeks to complete depending on finishes and what floor screed method is specified.

Super Rapid Construction Techniques, Only 09:30am on Day 2 of construction and the roof trusses are fitted! #sustainable #Svenskhomes pic.twitter.com/jEiuhIDIGE

We use cookies to ensure that we give you the best experience on our website. If you continue to use this site we will assume that you are happy with it.OkPrivacy policy